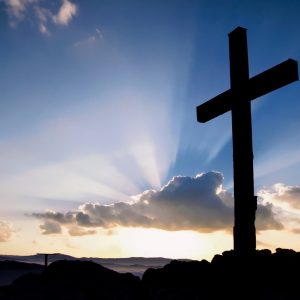 Preached on: Sunday 12th April 2020
The sermon text is given below or can be download by clicking on the “PDF” button above. Additionally, you can download the PowerPoint PDF by clicking here 20-04-12-Morning-Message-PowerPoint.
Bible references: Luke 24:1-12
Location: Brightons Parish Church

Text: Luke 24:1-12
Sunday 12th April 2020
Brightons Parish ChurchLet us pray. May the words of my mouth, and the meditation of all our hearts, be acceptable in Your sight, O LORD, our strength and our redeemer. Amen.

Boys and girls, what school or nursery do you go to? Shout it out just now! (PAUSE) I can’t hear you! Shout louder!!…Oh, that one!

Well, I’m sure some of you go to Wallacestone Primary School and I’m usually in there every Friday morning and lunchtime to visit two or three classes, and then run the Friday lunchtime Scripture Union Group. Going into Wallacestone was one of the highlights of my week and I’m really missing it!

Now, just before we all had an early school holiday, I was in chatting with the Primary 7s about Easter – and most of them know the Easter story, so I thought I would share with them some of the reasons why I think the Easter story really happened.

One of those reasons is in our story today, but our passage also gave me two more reasons – which is fantastic! So, I’ve got 3 questions for you, to see if you can remember the story, OK? Each one gives me confidence that Jesus is alive. Are you ready? Let’s get started.

First off – what weight do you think the stone over the tomb was? I’ll give you some ideas. Would it have weighed as much as: two bags of cement; two of me; two sofas; or two cars? Make a choice…quick, quick!…the answer is…two cars! Well done if you picked the right answer.

The stone would have weighed about two tonnes, or the weight of two 1979 VW Beetles. That’s a lot of stone, so if Jesus wasn’t dead and maybe He had simply fainted, then there is no way He could have got out Himself, and no way His friends could have rolled the stone away without the Roman guards hearing something and stopping them. So, the stone being rolled away is a major clue that Jesus really did come back to life!

Now, why are these two clues important? Well, back in the days of Jesus, sadly women were not believed, they were not regarded as good enough witnesses, for anything. Which is part of the reason why in v11 we read, that ‘[the disciples] did not believe the women, because their words seemed to them like nonsense.’

It seemed nonsense to the disciples, the men, because no one was expecting this, and they weren’t simply going to believe the women, because they were…women. Exactly!
It came across to the men as a silly dream, the sort of thing that people back then would expect from a few women who are upset with grief and lack of sleep.

Now, sometimes people today think that the first disciples must have made up the story about Jesus, because, after all, no one comes back from the dead, right?

Well, if the first disciples were trying to convince people back then to believe a fake story, then they would not have picked women as the first people to find out Jesus was alive! That would have been a bad plan, and so this another clue for us today: Jesus really did come back to life because the story matches with what really happened rather than what people would have made up!
The third clue is very like that too: if it was a made up story, then the smart idea would be to show the disciples having faith straight away, because then the disciples would be examples of faith and the perfect people to lead the early church.

But that’s not what we read: the disciples did not believe, they were not expecting Jesus to come back to life, it was a complete surprise to them! In a fake story, the disciples should believe straight away, rather than doubt.

Now, there are many more reasons for believing that Jesus came back to life, but those are three reasons from the story today: the big stone; the women witnesses; and the disciples being surprised.

I wonder, do you like surprises? And if you were trying to give someone a surprise, what would say? Might it be: boo? Or maybe: ta-da?

I read a story this week, about another minister, and in this story the minister is talking with the children at an Easter service in church, and he asks the children: what do you think Jesus’ first words were to his friends after He came back to life? And one little boy sprang to his feet, spread his arms out wide and said, “Ta-Da!”

And what is more, when Jesus came back to life, many things remained unchanged: the Romans were still in charge; the religious leaders were still bullies and bad people; people were still sick and scared.

But here’s the thing – on one level the wider world was still the same after Jesus came back to life; but on another level, everything had also changed – everything! Because in the wonderful events of Easter, there is a dead man who has come back to life, Jesus has conquered death and the grave, and that’s the kind of surprising good news which rewrites history, and not just for a year, a decade, or even a century…no, this is the kind of surprising good news that rewrites history for everyone, everywhere, and for evermore.

Friends, my prayer this Easter, is for us to know the risen Jesus journeying with us in these difficult days. Because as the Apostle Peter later reminds us: ‘Praise be to the God and Father of our Lord Jesus Christ! In his great mercy he has given us new birth into a living hope through the resurrection of Jesus Christ from the dead…’ (1 Peter 1:3)

Brothers and sisters, we not only have hope, we have a living hope, living because Jesus lives. And it’s hope, not wishful thinking. It’s hope, because it’s certain, we have strong and confidence assurance….

But we only have this because of Easter Sunday, which is summed up so well in our final hymn today:

“Then came the morning that sealed the promise
Your buried body began to breathe
Out of the silence, the Roaring Lion
Declared the grave has no claim on me
Jesus, Yours is the victory.”
(Living Hope, Phil Wickham & Brian Johnson)

Friends, our passage today, reminds us of the surprising story of Easter, a story that was not faked, a story which rewrote all history, and a story which suggests that even in our present darkness, uncertainty and fear, when all around seems to remain unchanged because of Easter, well, this story suggests we can still…
encounter Jesus today, because Christ is risen, He is risen…indeed! Praise be to God. Amen.