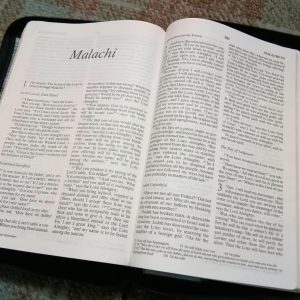 Preached on: Sunday 10th October 2021
The sermon text is given below or can be download by clicking on the “PDF” button above. Additionally, you can download the PowerPoint PDF by clicking here21-10-10 Message PPT slides multi pages.
Bible references: Malachi 1:1-5
Location: Brightons Parish Church

Holy Spirit, come among us and soften our hearts to the word of God.
Holy Spirit, draw near and reveal to us the heart and ways of almighty God,
Come Holy Spirit, with power and deep conviction, for we ask it in Jesus’ name. Amen

so in our reading today we find God’s people waiting, waiting in the time of Malachi and even cynical there were those great leaders Zerubbabel and Joshua whom both Haggai and Zechariah said were the men God’s chosen men for the new age and yet they’ve died and sure the temple has been completed but nothing momentous has occurred like Ezekiel said would happen that the temple would be filled again with the glory of the lord and what is more the day of miracles has passed with Elijah and Elisha and yes religious duties continue but it’s done without much enthusiasm whether by priest or by people and so the people are asking where is the God of our fathers does it really matter whether we worship him or not and they’re asking these questions because they see generations dying without receiving the promises God made there’s injustice there’s poverty there’s corruption and so the people are in this downward spiral feeling forgotten by God losing their faith such that some are apathetic and others are just downright antagonistic and belligerent towards God on the whole the people feel distant from God and are choosing to distance themselves even further from him because they think their attitude is more justified than that of faith and obedience so when God starts by saying I have loved you the people are quick to respond they take exception and say but how have you loved us how have you loved us the people doubt God’s love for them their whole situation undermines their confidence in God’s love and from that starting point all the rest of their issues all the rest of their sins and waywardness which God will challenge in due course all of these stem from this central problem of doubting God’s love you probably know you’ve probably experienced that living in difficult times or in times of waiting can be so very hard it can raise all sorts of issues all sorts of questions those times can places under strain it can raise temptations that we normally just shrug off and most often it those times of difficulty and waiting just undermine faith and can lead us to a place of cynicism because it feels like God just doesn’t care that maybe God’s not even there and so God’s people were doubting God’s love in their present and I wonder friends is that you is that you have you experienced something and hardship that has maybe broken your faith maybe broken you

What about in our circumstances?

for you such as his love

so if God’s love towards us is akin to the love within a marriage why would God ever settle for a tepid relationship after all how many of us like having a friendship or a more committed relationship that is perfunctory dutiful or cynical wouldn’t we much prefer to have something that’s full of adventure and life and passion and commitment well so too does God. God wants that kind of relationship with his people both then and now and so this final verse is a God’s call to a better relationship a better place in that relationship with himself he said it here and he’ll say it again throughout Malachi he wants to do things and say things that will stir up the love of his people for him he wants to move them from that place of apathy and of doubt and cynicism and move them to a place of commitment that is passionate and renewed he wants to bring them on that journey and in the coming weeks Malachi is going to show us the way back to an enduring and faithful faith in the lord the God who is does not change who invites all to return to him and never forgets friends he never forgets those who turn to him

Where are you Lord, in the depths of my anguish?

Where are you Lord, when I war with my mind?

Loud are the devil’s taunts, as he surrounds me.

Where in the dark will I find you?

But you have not changed and you are not changing.

And your promises, they will remain.

Where are you Lord, when I lie awake weeping?

Where are you Lord, when I endure pain?

Weak is my anxious heart, fear all around me.

Where in the night will I find you?

But you have not changed

and you are not changing.

And your promises, they will remain

You are the Lord, who endured suffering.

You are the Lord, who went to the cross.

Dying a sinner’s death for my redemption.

You are my hope and you are my song.

Lord, some of us are in those broken places

and it feels dark and lonely and you do seem distant

but you are unchanging

and so may you

be close and reveal yourself to folks

to be an expression of your love and action

so to you the unchanging God

in your name Jesus amen

If you want a copy of the album you’ll need to go online um the link is in the YouTube video description and we’ll maybe get it put up on our Facebook page this afternoon too and I do encourage you to listen to the rest of the album is very powerful and helpful in my experience this past week.