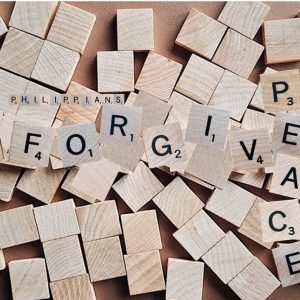 Preached on: Sunday 28th February 2021
The sermon text is given below or can be download by clicking on the “PDF” button above. there is no PowerPoint PDF accompanying this sermon.
Bible references: Philippians 4:2-9
Location: Brightons Parish Church

Let us join together in a moment’s prayer. Let us pray

In our reading this morning Paul is preparing to bring his letter to the Philippians to a close and as he does so he gives to them in verses 4 to 9. Some short, pithy, but vitally important instructions to govern their future walk as followers of their Lord. We might say he was underlining to them that it wasn’t sufficient to talk the talk, it was vitally important that they put his advice into practice and walk the walk.

There had been a serious falling out between two members of the congregation, two of the ladies there who had hitherto been front line workers for the Gospel. They weren’t on speaking terms and it seems that this was having a much more far-reaching effect than merely between the two of them but was impinging on the witness of the church.

in the previous chapters Paul has been hinting that there’s division in the ranks.

It shows how seriously Paul was alarmed by the situation when in a general letter to the congregation he named the two ladies involved Eurodia and Syntyche.

I wonder how they felt when their names were read out? Did they cringe? Did they wish they could disappear through the floor? Or indeed did they take offense at Paul – how dare he?

In verse 3 we learn that these women were no slouches. Paul tells us that they’d contended at his side in the cause of the Gospel. Some translations render this. They had labored with him and he goes on to say that their names are in the book of life. That was a traditional title of honour often used for people of God who’d suffered persecution but remained faithful. But human nature being what it is they’d had a serious fallout and it would seem that the church was possibly in danger of taking sides and thus causing division.

It’s not just sad when that happens in the church, it is an inroad for Satan to so discard, eventually nullify, the witness not only of those directly concerned but of the congregation as a whole and leave a trail of hurt and discord that is very difficult to heal – and so often the cause of the initial problem is comparatively trivial. But someone’s feelings have been hurt and they seek to bolster their situation by appealing to others to agree with them that they’ve been hard done by and so the ball rolls on and on gathering momentum as it goes and Satan rubs his hands in glee.

Paul asks them to overcome their dispute with one another and put into practice the qualities he’s previously mentioned in chapter 2 verses 1 to 4. To be like-minded; to be one and spirit and purpose; do nothing out of selfishness or conceit; be humble; love each other – the attitude of Jesus Himself.

Paul is so concerned he doesn’t just leave it to the combatants to get themselves sorted out, we might say he appointed an arbitrator, an unnamed person, but obviously a mature Christian whom Paul trusted, to help sort out the situation for the good not just of Eurodia and Syntyche but the church as a whole.

I don’t know about you, but I’d love to know what happened. Was Paul’s advice heeded? Did the two women have the grace to acknowledge their sin and be reconciled to each other, unto the Savior they loved, the savior for whom they’d previously been effective witnesses?

let’s not kid ourselves that we can carry on being effective witnesses for Christ if we’re harboring resentment against another in our hearts. The two are incompatible. Jesus was a well aware of that. In Matthew 5 he first tells us in verse 23 if we’re wanting to serve God but have a grievance against someone the first thing we’ve got to do is go to that person and make our peace with them, and then in verse 43 he goes even further and tells us to love our enemies. We cannot at one and the same time truly love someone and hold a grudge against them. Holding a grudge is the sure way to lose our peace of mind and heart and Paul tells us in verse 4 to rejoice in the Lord always.

Rejoice in the Lord when we’re harboring the acid of resentment and bitterness even of hate?

I read about one Christian man who had been terribly hurt by another. It was a really bad situation. Unfortunately, the first man found it impossible to forgive. Instead, the incident took over his whole life. He could neither think nor talk about anything else, Several people including his wife and even his doctor advised him to forgive the other person but he refused. He preferred to hold on to his hurt. He developed all sorts of physical problems, all caused by his attitude of mind and heart.

He died while still a comparatively young man and the doctor remarked to the widow that it was a pity the death certificate couldn’t show the real cause of death – death by unforgiveness.

Paul tells us to be anxious about nothing rather to be faithful in prayer, and assures us that when that’s the case we’ll enjoy the peace of God that passes understanding. The peace of God, but when our hearts are filled with self-pity, with anger, with spitefulness, I don’t think so! To be like Jesus.

Well, he prayed for those who nailed Him to His cross and asked His Father to forgive them. That means only one thing – if someone has hurt us even and especially when they’ve hurt us badly, there’s only one thing that we as Christians can do to be obedient to the Savior we say we love, and that is in the power of the Holy Spirit working in us and through us, to love that person, really love them, pray for them, forgive them, no matter how hard that is and nobody least of all Jesus said it would be easy.

and every time after that when the familiar negative feelings resurface, as they will, stop forgive, all over again and pray for them and for yourself, hard.

When we live like that we will be able to follow Paul’s advice in these verses when he said in verse 8 “whatever is right, whatever is pure, whatever is lovely, whatever is admirable, if anything is excellent or praiseworthy, think about such things.”

I pray that all of us will know the reality of the peace of God within our hearts and lives as we live for Him and know His love and His grace filling us and flowing through us. Then we will indeed be faithful and effective servants of our Father God and His Son Christ Jesus.