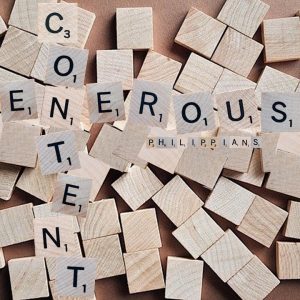 Preached on: Sunday 7th March 2021
The sermon text is given below or can be download by clicking on the “PDF” button above. Additionally, you can download the PowerPoint PDF by clicking here 21-03-07 Message PPT slides multi pages.
Bible references: Philippians 4:1-23
Location: Brightons Parish Church

When I talk with young people who may have very little experience of Christianity I try to help them see beyond these narrow misconceptions.

As I prepared for today I came across a testimony which someone shared in light of being diagnosed with a serious illness. This individual said “The options open to me medically are minimal and at best do not promise renewed energy nor longevity. The other option is to turn this over to God in faith. This we have been directed to do by God after much prayer and spiritual surrender. What the future holds we do not know, but we know God holds it. These past few days have rolled over as like an avalanche leaving in their wake some central certainties which make up my thanksgiving prayer list. Out of the dark night of the soul has come the sunlight of God’s love. I am thankful for God who is real and personal, for a Christ who is present in power, and for the Holy Spirit who is by our side in every struggle. My gratitude overflows for a faith that is unwavering in the face of seemingly unsurmountable obstacles and for the personal practice of prayer that brings all God’s promises to bear in any situation. My thanksgiving list is made this year not from what I have but from who has me, a God who’s able to do exceedingly, abundantly above all I ask or think.”

What does Christianity give you?

Would your list have included contentment as this individual spoke of? Would it be, would there be peace and hope? Would it include a love which helps you to live well such that you’re not focused on yourself?

The individual who wrote those words was an older minister and he wrote them to his congregation. Here was a man who had a deep and mature faith. Someone who had learnt the way of Jesus and how I envy such a mature faith!

In our passage today, Paul follows on from the previous section where he said in verse 9 “Whatever you have learned or received or heard from me or seen in me, put it into practice.” Once more Paul calls them to grow in their faith, to grow in the way of Jesus, to grow in maturity. Towards that end he says they are to put into practice what they have seen in him whether before or now, and so he speaks of the maturity they are currently showing and how they might still grow in further maturity. We might summarize these two points as learning contentment and learning generosity.

Paul says, “I am not saying this because I am in need, for I have learned to be content whatever the circumstances. I know what it is to be in need and I know what it is to have plenty. I have learned the secret of being content in any and every situation whether well fed or hungry, whether living in plenty or in want. I can do all this through him who gives me strength.”

Here is a man, as I’ve said in previous weeks, who is imprisoned, potentially facing execution and surrounded by hostile opponents, and yet Paul can still say that he is not in need and that he is content. In Paul’s example I see an elder brother who is much farther down the road than I, and he beckons, he calls me, he calls us all, to know more of the way of Jesus, to grow and mature, so that we can share this contentment no matter the storm or circumstance. But let’s notice that Paul said he had to learn it as well, it wasn’t automatic for him but it can be learnt.

Key to it all is to find our strength through Jesus, through relationship with Jesus. In this way Paul is challenging the attitudes of his day for the stoic philosophers of the first century also prized contentment and saw it as a mark of being a truly wise person which they esteemed, yet they said you could find such contentment within yourself. Theirs was a contentment through self-sufficiency, but Paul points to another way, to contentment found through dependence on Jesus. We might say a ‘Christ sufficiency’.

I wonder friends, do you yearn like me for greater contentment? When people look at your , do they see someone who exudes a deep contentment even in the trials of life? Could it be that we’re seeking contentment in the wrong ways or places? Are we relying on ourselves? I wonder are you tired of that way of life? Would you not rather find an alternative which brings joy and radiates a measure of hope, even in the darkest of times? I know I would do.

Paul says this is available by finding our strength through Jesus, through relationship with Jesus.

The word ‘strength’ in the Greek is ‘endunamo’ which comes from the word ‘dunamis’ meaning power. One commentator paraphrases Paul as saying ‘I can do all this through Jesus who gifts me with dynamite’ which I love. This got me thinking though, and I searched elsewhere in the scriptures in the new testament for where Paul talks about power in his other letters and I noticed these three things:

Because God would want to help you learn contentment, to mature in faith by finding, in Jesus, the strength, the dynamite, the power to know a peace or a purity or a perseverance which is beyond your mere human ability and self-sufficiency.

Now hear me right please, we could say much more about contentment. It’s not wrong, for example, to pray for circumstances to change. Paul does. It’s not wrong for difficulties to weary us. Paul speaks of those hardships,

and also please, do not simply hear this as a challenge. Hear this as an invitation. An invitation to another way of life, to life in all its fullness. So, will you respond in faith today and seek to mature by learning contentment through Jesus?

Paul goes on, and he commends the Philippians for their generosity, something which many others had not shown.

The reason for this is that Paul doesn’t want to appear like the contemporary charlatans of his day who would build a gathering of followers and then gain financial support from them. Paul doesn’t want to come across as being motivated by financial gain. Nevertheless he commends the Philippians, he commends them for their generosity, their sharing to meet the needs of others. Presumably, this they also learnt from Paul who from his writings was one who encouraged the churches to care for one another and to care for others.

I wonder friends, do we have a mature faith that shows itself in generosity? Do we realize that, as followers of Jesus, we are called into something greater than ourselves? Do we realize that the way of Jesus, which does bring freedom and contentment, is also the way of sacrifice? Because, as we receive His power, to know his love, we’re called to show that love and sacrifice to others. As we receive His power to be pure through self-control, we’re called to deny ourselves that others might benefit.

Brothers and Sisters, as I said earlier in our service, we face a difficult time ahead for the Braes Churches, not just in the next few months, but in the years to come. Whatever lies ahead, will our response be marked by generosity and contentment? Do we understand ourselves to be part of something bigger and that the way of Jesus is not, and has never been, about buildings? Are we willing to follow Jesus in the way of sacrifice and of denying self? What would that look like amongst us across the Braes?

Yet, let’s not leave this for application in a few months time, What about now, today?

Well, this coming week the Tuesday Evening Event online will feature input from Tearfund and they are asking churches to partner with them in their Lent Appeal, and for every one pound you give it will be doubled by outside funding. Will you get involved? Will you choose to sacrifice and be marked by generosity?

Friends, today we conclude Philippians. There have been many important lessons, many pointers to what it means to live as followers of Jesus and grow in maturity, to walk in the way of Jesus. I pray that we will be such a people, a people who respond, who say yes to God’s invitation, such that we too might be worthy of the Gospel and all to the glory of God may it be so, Amen