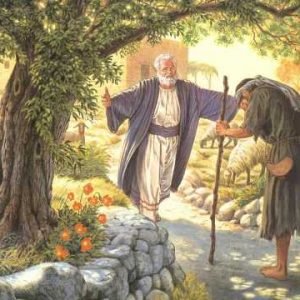 Preached on: Sunday 2nd June 2019
The sermon text is given below or can be download by clicking on the “PDF” button above. Additionally, you can download the PowerPoint PDF by clicking here 19-06-02-Brightons-Powerpoint-Scott-sermon-morning.
Bible references: Luke 15:11-32
Location: Brightons Parish Church

Texts: Luke 15:11-32
Sunday 2nd June 2019
Brightons Parish ChurchIn our sermon series on Luke chapter 15, we have been exploring what these three parables of Jesus reveal to us of our heavenly Father and our focus has primarily been on the sheep, coin and younger son. Each of these three is very clearly lost – the sheep wanders away and the shepherd goes to find it; the coin falls, rolls into a dark corner and the woman hunts high and low; the younger son rebels but is welcomed home by a loving, patient, compassionate and forgiving father.

‘Now the tax collectors and sinners were all gathering round to hear Jesus. But the Pharisees and the teachers of the law muttered, ‘This man welcomes sinners, and eats with them.’ Then Jesus told them this parable…’

Now, in the parable of the prodigal father, there are two sons – one bad and rebellious, one good and obedient. There are two groups of people are listening to Jesus; there are two sons in the story. So, quite clearly, the elder brother, the one who stays at home,…
portrays the religious leaders. In telling this parable, with its particular characters and ending, Jesus is seeking to speak into the lives of the religious leaders, He is seeking to challenge their way of life just as much as He is seeking to challenge the tax collectors and sinners.

So, what is Jesus saying to them? Well all three parables are about being lost and how we become found, how we return home, how we become reconciled with Father God. The sheep is found, the coin is recovered, the younger son is welcomed home. So, we can naturally conclude that Jesus is saying the elder son is just as lost as the others and that there is a way for him to find his way home as well.

So, in what way is the older son lost? Well, when the elder brother hears that a celebration is being held for the return of the younger son, this is his response:

‘The elder brother became angry and refused to go in. So his father went out and pleaded with him. But he answered his father, “Look! All these years I’ve been slaving for you and never disobeyed your orders. Yet you never gave me even a young goat so I could celebrate with my friends. But when this son of yours who has squandered your property with prostitutes comes home, you kill the fattened calf for him!”’ (Luke 15: 28-30)

The elder son is furious, furious at the father for the grace and forgiveness and compassion that has been shown to the younger son.
But just like the younger son, the elder son also disgraces the father, for he refuses to go in to what is perhaps the biggest feast and public event the father has ever held. The elder son, remains outside, a vote of no confidence in the father’s actions, a refusal to condone such love and welcome. This forces the father to go out to the elder son, a demeaning thing to do when you are the head of the family and host of a great feast. And in response, the elder son does not address his dad as “esteemed father”, or “my dear father”, but simply with the word “look!” – in our culture, we would probably say “look you!”, and to say that, in a culture of respect and deference to elders, is simply outrageous behaviour. The elder son, in mere minutes, has disgraced his father three times, and in his disgracing of his father, we begin to see how the elder son is lost, for in the midst of his rant he says this:
‘All these years I’ve been slaving for you and never disobeyed your orders. Yet you never gave me even a young goat so I could celebrate with my friends.’ (v29)

And so, what Jesus seeks to convey here…
is that you can rebel and be distant from the father, from God, either by breaking His rules, like the younger son, or by keeping all His rules diligently, like the older son. This is the challenge of Jesus to the Pharisees, that by their rule keeping, they are just as lost as the sinners gathered around Jesus. As one commentator wrote, ‘the main barrier between the Pharisees and God is “not their [blatant] sins, but their damnable good works.”’

And sadly, in every generation, across all the millennia of human existence, we have thought we can earn God’s approval, that we can earn salvation, that we can balance the scales and do enough to merit the Father’s love, to merit access to heaven, by our good deeds. But the teaching of the Christian faith, the teaching of Jesus and of the early church, challenges that very idea.
The Apostle Paul wrote to the Romans: ‘For no one can ever be made right with God by doing what the law commands. The law simply shows us how sinful we are.’
(Romans 3:20)

Jesus himself taught the same thing, for in another parable He said, ‘Two men went up to the temple to pray, one a Pharisee and the other a tax collector. The Pharisee stood by himself and prayed: “God, I thank you that I am not like other people – robbers, evildoers, adulterers – or even like this tax collector. I fast twice a week and give a tenth of all I get.”

‘But the tax collector stood at a distance. He would not even look up to heaven, but beat his breast and said,
“God, have mercy on me, a sinner.” ‘I tell you,’ said Jesus, ‘that this man, rather than the other, went home right with God.’ (Luke 18:10-14)

In every generation of human existence, there have always been elder brothers, like the Pharisees, who have sought to be their own Saviour and Lord, and who have been blind to this reality in their lives.

Friends, on a day when we have heard a profession of faith in Jesus and come to celebrate the meal that reminds us of the sacrifice of Jesus, can I ask you: who is your Saviour? On what grounds does the Father accept you? On what grounds are your sins forgiven? On what grounds will you get into heaven?

In preparation for today, Alan and I worked through the Open Door material, and we spent some time talking about this verse from John chapter 1:

‘Yet to all who did receive him [Jesus], to those who believed in his name, he gave the right to become children of God.’ (v12)

You are never welcomed into the family of God through good works, nor the family you were born into, nor attendance at church or being a member –
as Alan and I discussed, we enter God’s family, we come home to God, when we believe in Jesus and receive Him. It’s not enough to have the right thoughts, the right beliefs, about Jesus – even the demons know who Jesus is.

But when we act upon our beliefs, then we receive Jesus: to receive Jesus, we must acknowledge that we need forgiveness, we must trust in Jesus for that forgiveness by asking for it, and we must submit to Him as King, as Lord, of our lives.

The Good News of the Christian faith is both frightfully challenging and wonderfully liberating: you can’t be your own Saviour, there’s no shortcut, there’s no back door into the family of God, it’s only through Jesus.
Yet, wonderfully, He makes it so easy, you must simply ask for His forgiveness, and yet it is also so costly, for you must submit to Him as Lord of your life.

Friends, who will we be? Who are we?

Are we younger sons and daughters, ready to acknowledge our need of forgiveness,…
to depend on the grace of Father God, and come home by trusting in His means of salvation through Jesus?

Or, are we elder brothers and sisters, blind to our true condition and seeking to be our own Saviour and refusing to bow the knee to Jesus?

Who is your Saviour? Is it yourself and your damnable good deeds? Or is it Jesus?

Who is your Saviour, my friends? I pray it will be Jesus.